Manhattan: NYC Artists are painting over shuttered storefronts to spread positive messages in support of the Black Lives Matter movement.

Daniel Bonilla, an artist and longtime Inwood resident, felt the call to action as an artist in the wake of George Floyd’s murder. Along with the help of Susana Osorio, the owner of MamaSushi on Dyckman Street, he began the process of painting a mural of George Floyd on the boarded-up restaurant storefront. Osorio saw it as a great opportunity to spread a message of solidarity and hope to fellow New Yorkers and Inwood residents. Osorio donated a lot of paint to Bonilla and other community artists, and spoke to fellow business owners on the street to convince them to allow art on their storefronts as well. As Bonilla explains, he “wanted to show awareness to the community, especially out over here which is a big melting pot,” and to ultimately “spread a positive message out of something negative.”

Brooklyn-based artist Denis Ouch also felt an urgent duty to pay tribute to the Black Lives Matter movement through his art. Ouch began tagging various boarded-up buildings throughout the city with the same African-American Superman rendering. He explains that he chose Superman because he symbolizes “strength and indestructibility,” and represents “justice.” He felt compelled to spread this image in the hopes that people would notice it and get inspired to fight for the right cause.

Fellow NYC Artist Satoshi Fujita, who works under the moniker Dragon76, felt a similar call to action. Fujita created a giant mural in tribute to Floyd on the Lower East Side, and hopes that it will inspire people to take action in response to the problem of racism. As a Japanese-American artist, Fujita notes an overall “Coexist” theme is present in most of his work, and hopes that this tribute to Floyd acts as a positive reinforcement of the Black Lives Matter movement. 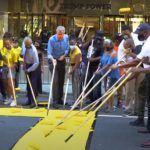