The FDNY called for all hands on deck to attack a fire that broke out in the former Rolex 12th story building at 655 Fifth Avenue on Tuesday.  Firefighters put out a drum that might have caused the blaze on the first floor that contained diesel fuel.  The building is under construction.

The NYPD closed Fifth Avenue at 52nd Street until the all clear was given.  There was no report of injuries.  The cause of the fire remains under investigation. 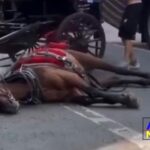